Step Eleven, a true gift to each one of us.

Step Eleven softens my heart every time it’s the topic of discussion in one of my meetings.  That wasn’t the case when I first got sober however; it wasn’t the case for the first year or two.  Not because I didn’t believe in the possibility of the power of prayer or meditation; but because I had never tried it before walking into AA.  And then when I did, I simply couldn’t sustain conscious contact when I did try.  Nor could I fathom what God’s will for me might be.  Actually, I had never ever considered the concept that God might have a plan for me.  For any of us.

Following that first meeting on May 24, 1976, I’d go to multiple meetings weekly and listen intently to others talk about their sobriety, their prayer life and the commitment to meditation they had made on a daily basis, and I felt like a fraud.  I’d nod in agreement while they spoke.  I wanted to “seem” like them.  When alone, I’d edge close to what they said they did but I didn’t feel like they claimed to feel.  Not at all.  I felt nothing.  Nothing at all.

I wasn’t a quitter though.  I prayed.  I really did, even though it seemed hollow to me.  But meditate?  Not really.  Not in the way others said they did.  I sure wanted to learn though, primarily because it appeared that others were living more peacefully than I was.  I felt anxious and unsure of myself.  All the time.  I knew there had to be something I was doing wrong.  I just didn’t know what.  I often suspected others knew more than I knew because they had gone to treatment.  I, on the other hand, got sober in AA.

After being in the program for about a year, I heard people talking about Transcendental Meditation and how much they loved it.  I was curious so I took a course in T M, as it was referred to.  I was desperate to succeed at meditation.  I wanted to be like my friends.  It proved to be very effective for me and over the next few years I was a regular meditator. To this day I remember my “mantra.”  And then, like so many good habits, I let it slide and have not been a regular meditator since then.

Don’t get me wrong, I do sit quietly and talk with God on a daily basis, more than once, in fact; and I am always available to His messages.  But I feel nudges more than hear words.  They serve me well enough though.  The absolute in my life is my willingness to believe, wholeheartedly, that God has been with me as a constant companion during every breath I have taken.  And I believe too that He doesn’t really care if I sit down and formally meditate.  He will be present to guide me regardless of my actions.

But what is it about Step Eleven that is still so captivating after all these years?  Personally I think the very idea of “searching” through prayer and then “searching” through meditation gives us the okay to not be expert at either for how ever long it takes us.  Even though I was quick to practice praying, I didn’t really have a handle on who God was, how God might show up in my life, if God could actually be present to all of us at the same time.  Like I said, I was a bit of a skeptic.  I didn’t grow up in a household where God reigned supreme.  In fact, He was never mentioned as far as I can remember.

Knowing God’s will for us and having the power to carry that out is the whole point of Step Eleven, of course.  As I said earlier, I was completely stymied regarding God’s will for me.  And a good friend suggested I try his interpretation.  He asked me, “Do you believe that God is love?” I did.  And then he said “Will is thought.  God’s will is loving thought.”  That worked for me.  If I behave in a kind, loving way toward everyone, I will be fulfilling God’s will for me.

How much simpler can it be?  I had been afraid that God might want me to do something I wouldn’t want to do.  I gave up that idea.  It’s been many years now that I have been trying to practice, on a daily basis, being kind and loving.  I don’t always succeed but I do think God is pleased with my attempt any way.

I think God is pleased with all of us, in fact, as long as we are showing up in the lives of our friends and strangers too, to the best of our ability.  How lucky we are to have a blueprint for living, one that demystifies the many choices that stand before us.  There is always the right one to make.  God can help us make it.  But if we insist on making the wrong one, we can still trust that God will love us any way.  How great is that? 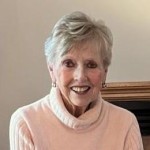 I am an author, a lecturer, and a workshop presenter. I have presented programs throughout the United States, Canada, Mexico, Germany, and Ireland. As of July, 2010 I have published 23 books, with number 24 being released in spring of 2011 and a memoir underway. For a listing of my books and ordering information, go to www.womens-spirituality.com. To contact me about presenting a program in your area, call 239-398-6327 or e-mail me from my web site or at jcasey4991@aol.com

Make every task you undertake, or person you encounter, your “universe” for the moment.

Seeking the silence is a true gift. . .

Being attentive to our own lives.